this is how two vermonters celebrated today

Ben & Jerry’s FREE CONE DAY! I had to get a photo of the 40th Annual poster on the window as we waited in line: 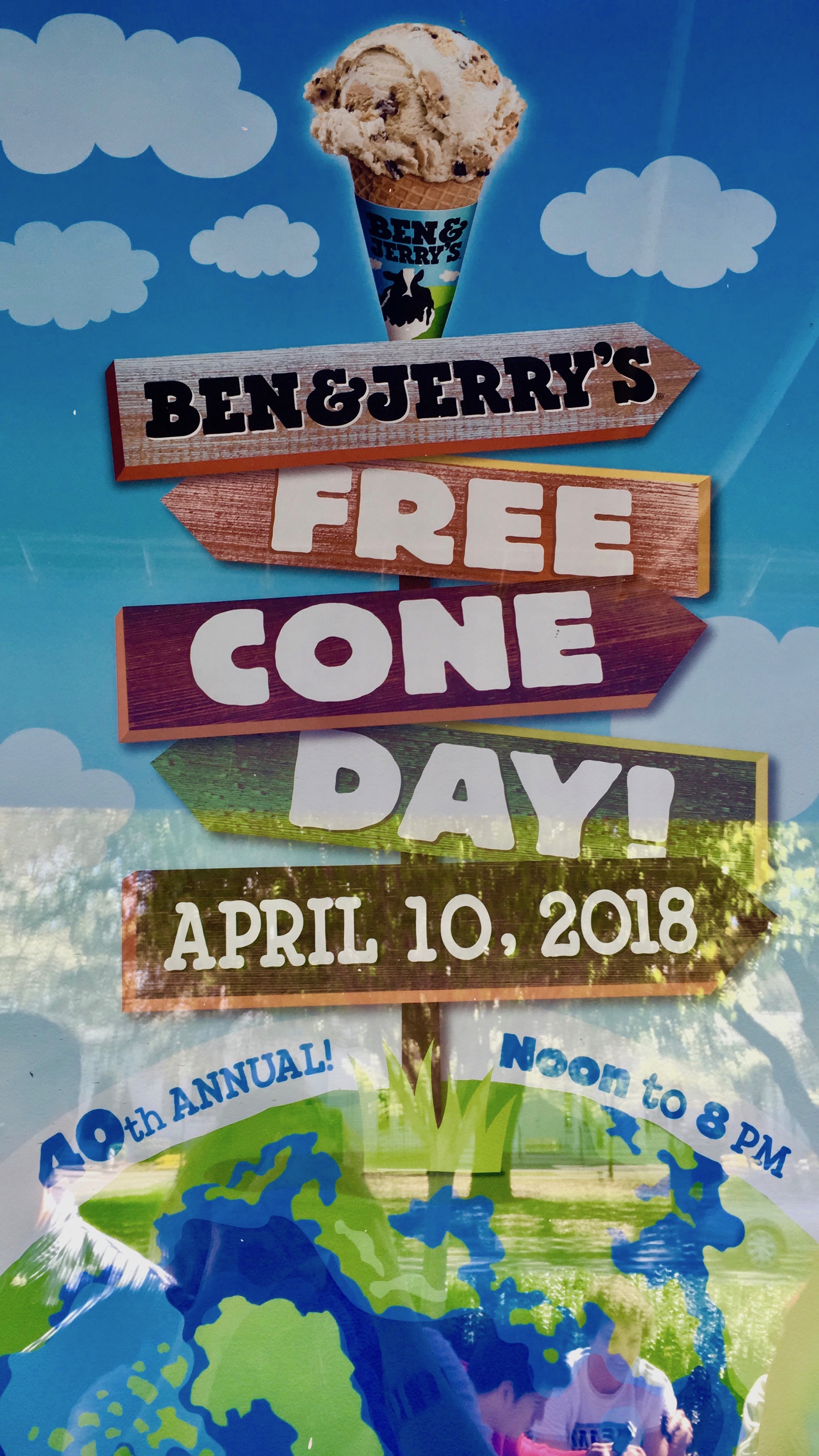 Not surprisingly, the place was packed, but the line moved fast. The wait gave me just enough time to play around with a magnet board meant for the kiddos: 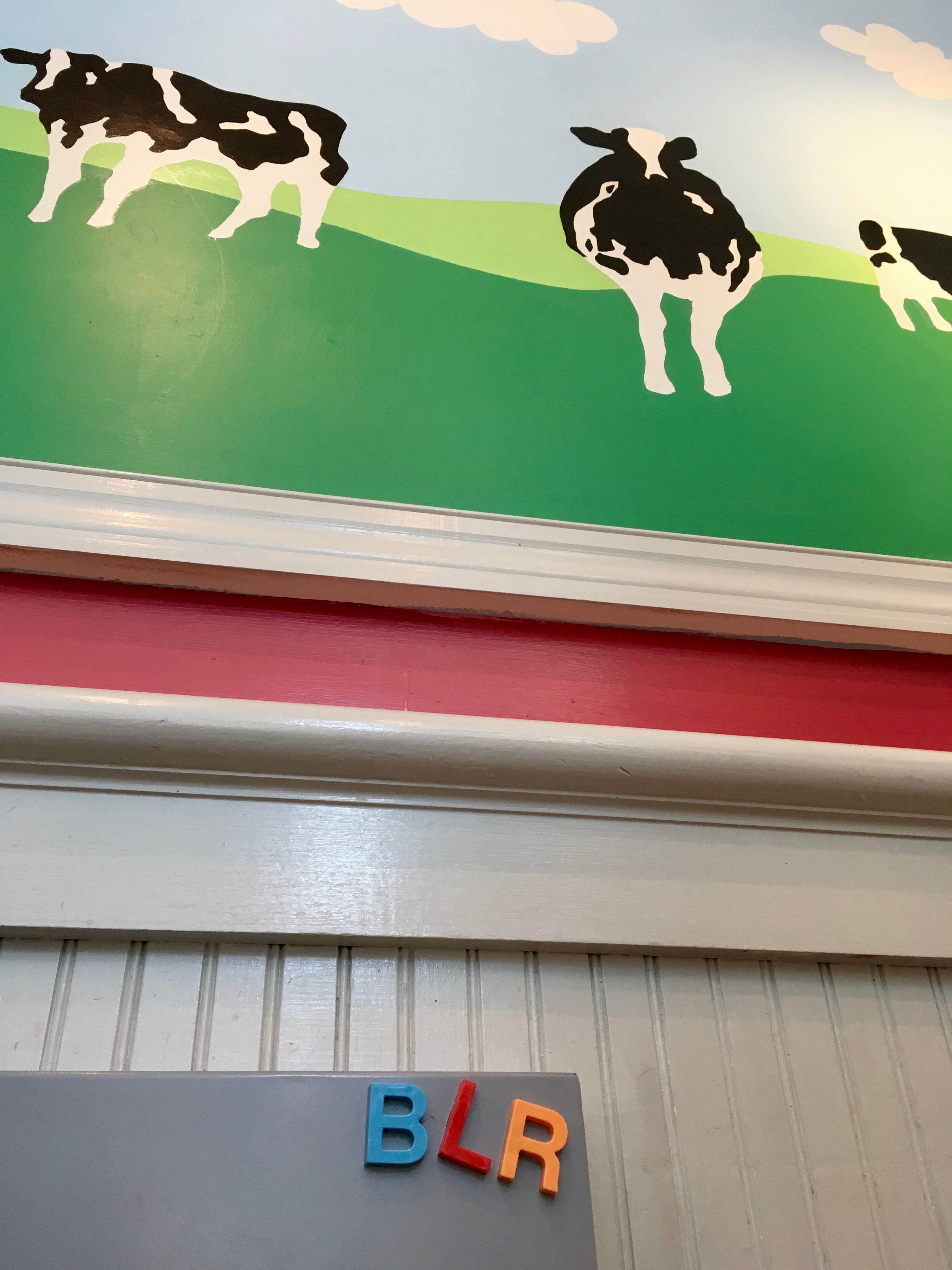 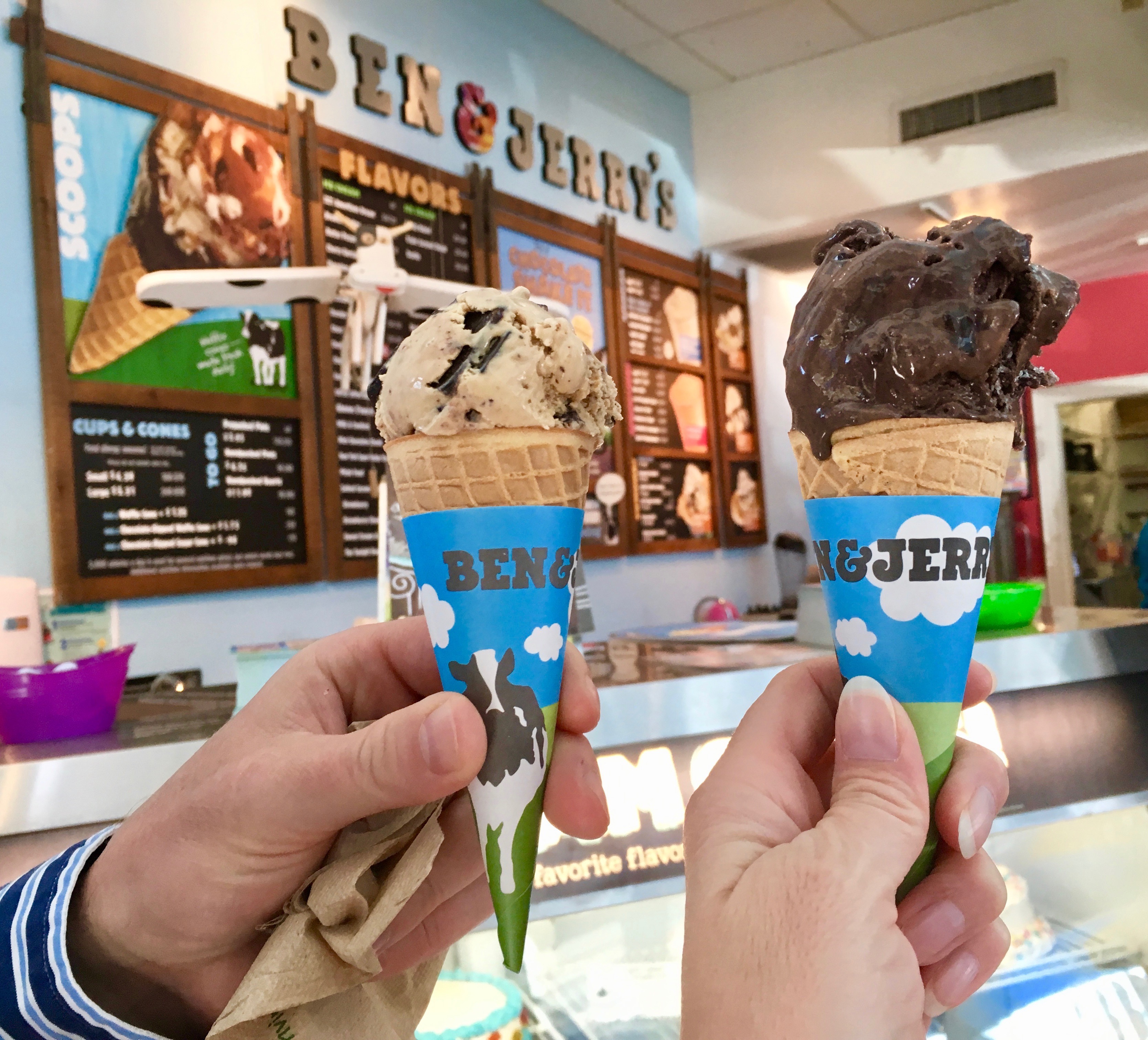 (See what we did with the cone wrappers there?:)

It’s nearly 8PM now, so this glorious ice cream give back event will be over by the time I press publish, but don’t worry, it’ll be be back again. In the meantime, grab yourself a pint of your favorite flavor at the grocery store. You can cozy on up with your buttercup, and listen to the great story of Ben Cohen & Jerry Greenfield, and how they started their delicious frozen empire on NPR’s How I Built This.

We love you, Ben & Jerry! Thanks for loving us back and showing it.

Today I celebrate friends who start their own travel companies: 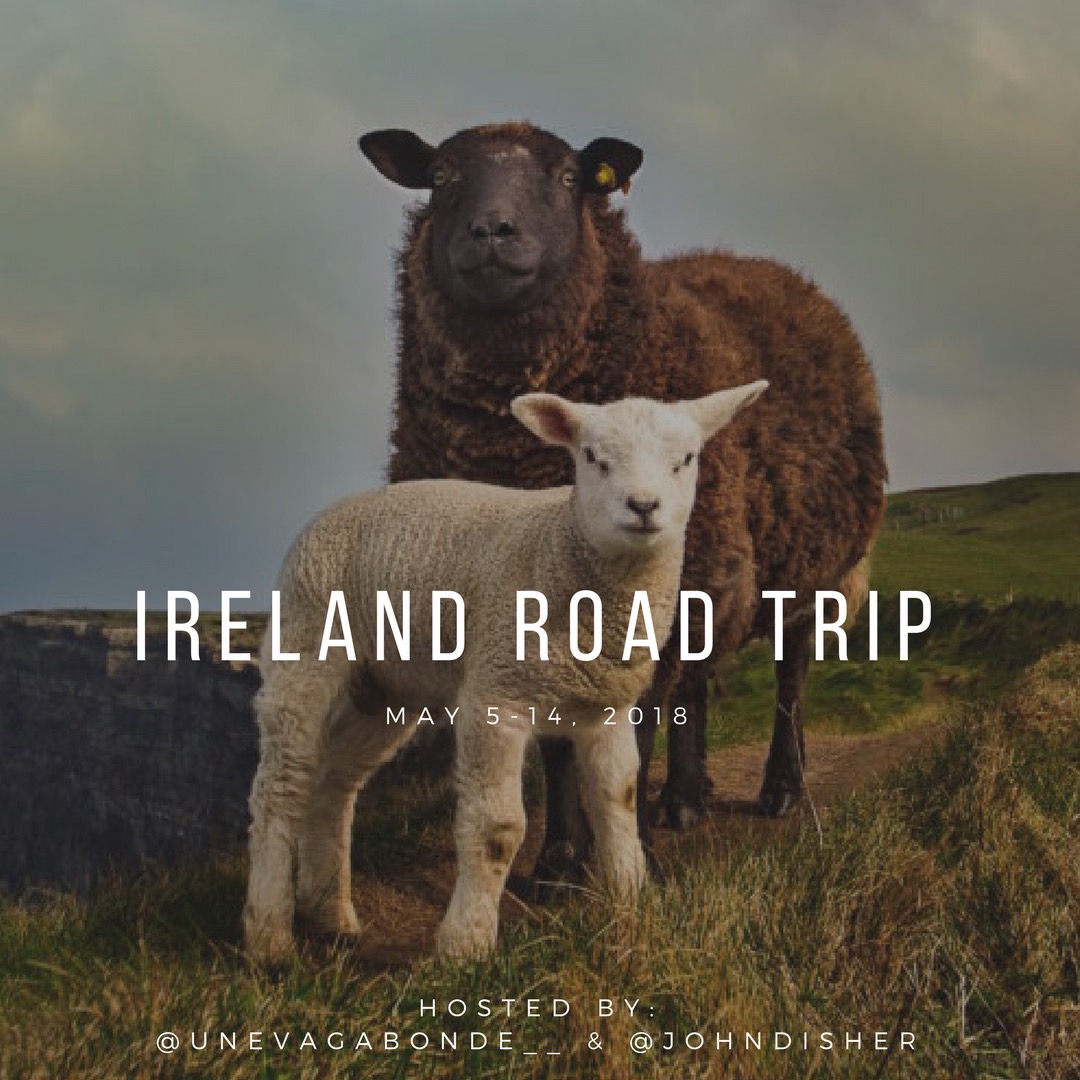 Check out this trip to Ireland in May! A great deal and opportunity for off the beaten path adventure with a couple of experienced and talented hosts. It’s pretty awesome when people find their super passions and want to share them with others.

Maybe it’s time for you to fly away, little birdie?

Today I celebrate entrepreneurs, because it takes a lot to keep the hustle going when you work for yourself: 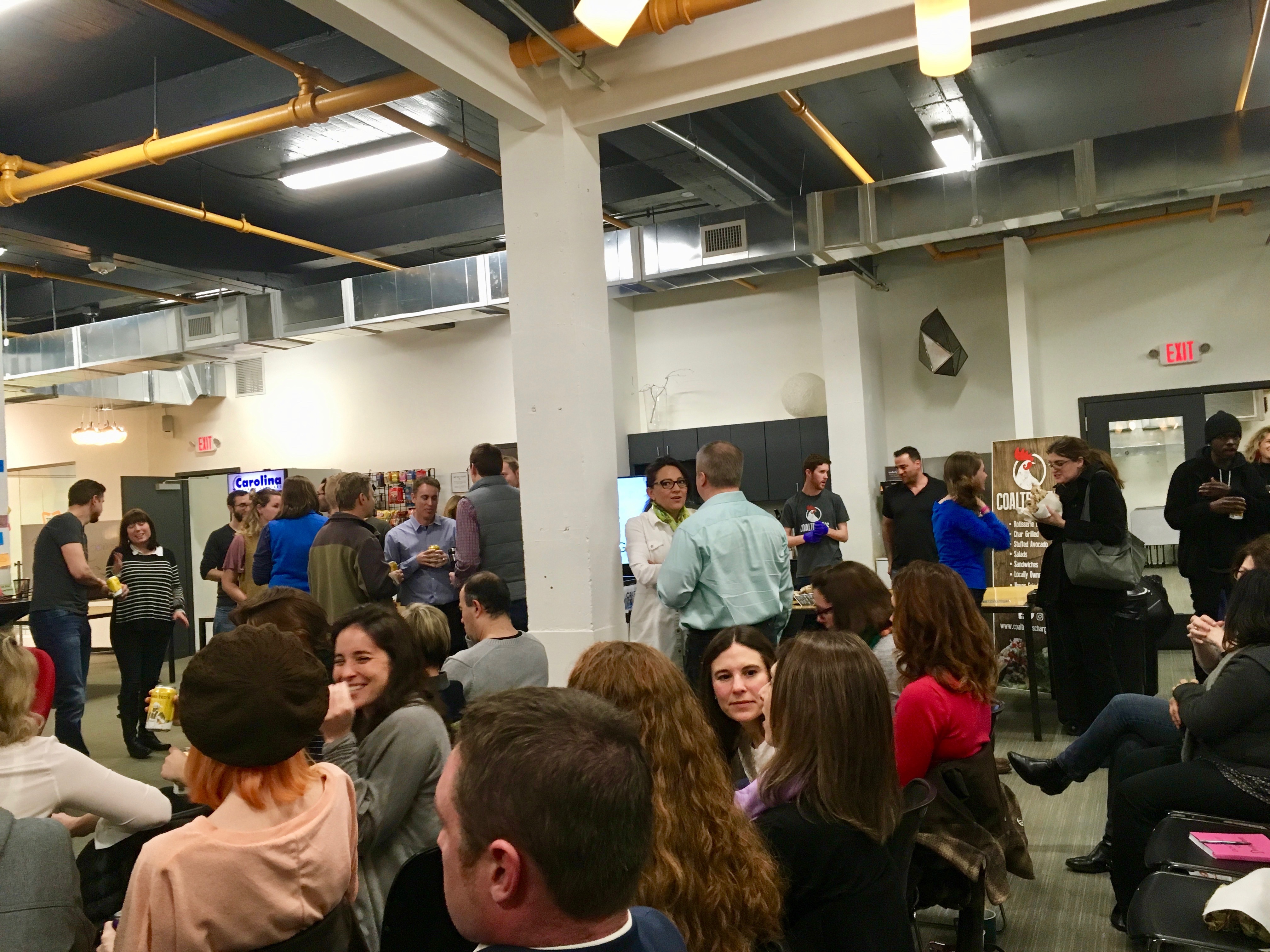 I went to F*ck Up Night a Advent Coworking tonight. F*ck Up Night is, you guessed it…an event where a panel of entrepreneurs share their stories about how they got to where they are, and all their f*ck ups along the way.

The kind of passion, drive, and hustle it takes to work for yourself is not for the weak or tired, to say the least. There’s a whole lot of regular “Why don’t you just go get a real job?” and other ridiculous opinions we’ve all heard, as we scrape the last penny out of the bank account, put in another late night, and wake up early to pound the pavement again. Those things would make most people break down and cry like babies. (And we have at times.) But! Figuring out ways to navigate this crazy world and make a living doing what you love and believe in so hard core, even your hero couldn’t talk you out of doing it? That, is pretty f*cking awesome. And totally worth the expenditure of those blood, sweat, and tears days.

Does something you overhear in a conversation at a cocktail party make you want to jump over the appetizer table, knocking over the hostess as you spill your martini, just so you can be talking about it, too? I think you’ve found your thing, baby. Go for it.

You know what you love to do. It’s ok to feel like you want to punch someone in the face next time they tell you you’re nuts to chase the life you want. You don’t have to punch them, just keep looking straight ahead, and let all that bs outside noise fall far behind you.

What lights your fire?

the best leaders know how to play

A week ago I road tripped to Charleston with LeaderSurf Founder, Brian Formato for PitchBreakfast:

If you’ve been following here this summer, you know I attended the LeaderSurf June class in Nicaragua. Anyone I know has heard about this program and what an amazing, insightful experience I had, about a zillion times at this point. I’ve joked that I’m a walking billboard for Brian’s leadership development + learn to surf program. This single experience feels like it has completely catapulted my personal and professional life into places I never expected. Serious positive impact.

I’ve always been a travel pusher; The person who encourages exploration, trying new things, and the importance living outside the drone zone. I’ve traipsed the globe, and had a hell of a lot of fun doing it. Of all the fun I’ve had during my travel, the fun hasn’t even come close to comparing to what I’ve learned by stretching myself in foreign environments. I really stretched some muscles that have needed it for a while now during my LeaderSurf time, and saw my fellow participants come alive and become inspired again about work, too. It was awesome.

I think all of us adults have forgotten that we can have fun AND be incredibly productive and responsible. It seems like there’s some kind of rule that we have to sit inside a classroom, boardroom, or conference center to learn anything new about our company, our jobs, or ourselves. Who the heck had that terrible idea? People are uninspired. They lack drive in their everyday because their passions are squashed. They’re not encouraged to keep cultivating their talents and interests and relate them back to their work. They’re bored out of their minds in training situations because they are in cold and vanilla spaces.

Maybe we should shake it up a little around here?

It seems like common sense for any organization to jump at the chance to send their executives to a leadership development program like LeaderSurf; Throw your best and brightest outside of their comfort zones to learn a new skill in a foreign place. They meet other executive peers, learn more about themselves, and have a blast doing it, then come back to your company refreshed and ready to take on the world.

Send your people to step out of the gerbil wheel and let some waves hit them in the face. It will be a challenge, but they will love every minute of it, and then love you for sending them. Who wins? Everybody.

I was already a big fan of Airbnb, but after last nights Super Bowl, I’m now a super fan:

In my experience I’ve found, those who have any bit, of any hate, for any kind of rainbow, (sex, skin color, religion, etc.) are actually afraid of themselves.

This world is big. Every heart beats the same. Let’s not be afraid of that.

Hats off to Airbnb and every other voice, continuing to share the message that love will always win.

I guess I’m a writer. My grammar is terrible, I’m still not sure where quotes go, where commas should live, what should be italicized, capitalized, or what sounds good. I just write because I love to and I need to, to keep my sanity. Saying all that, pretend the below is formatted correctly in some kind of poetic form that makes sense:

I saw this commercial tonight:

…while watching the Golden Globes. It came on right after Meryl Streep’s speech which was unexpected, and made me stand up and cheer. LOVE the two words Jeep commercial, LOVE Meryl’s speech.

Hoorah for inspiration and inclusivity!

another successful breakfast by schoolhouse maple 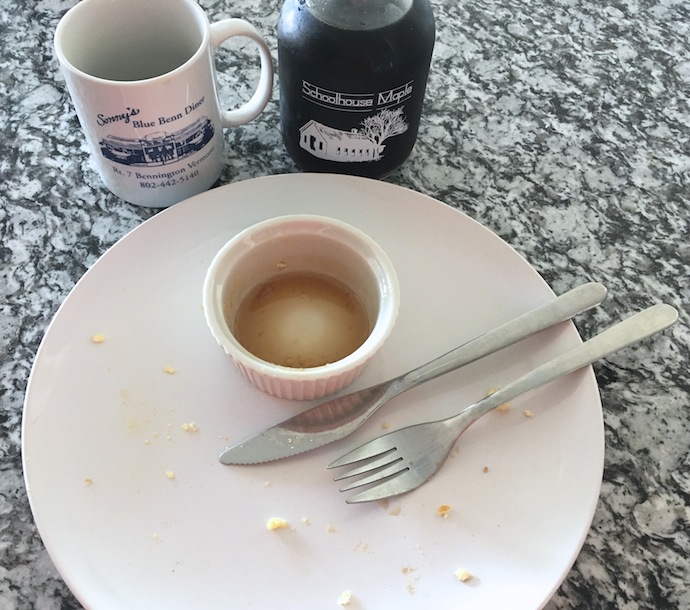 …by successful, I mean delicious dips in the warm maple syrup that my friends Jon & Dana Finny make. My mangled because I still can’t get the hang of flipping pancakes properly, still taste amazing, doused in this stuff: 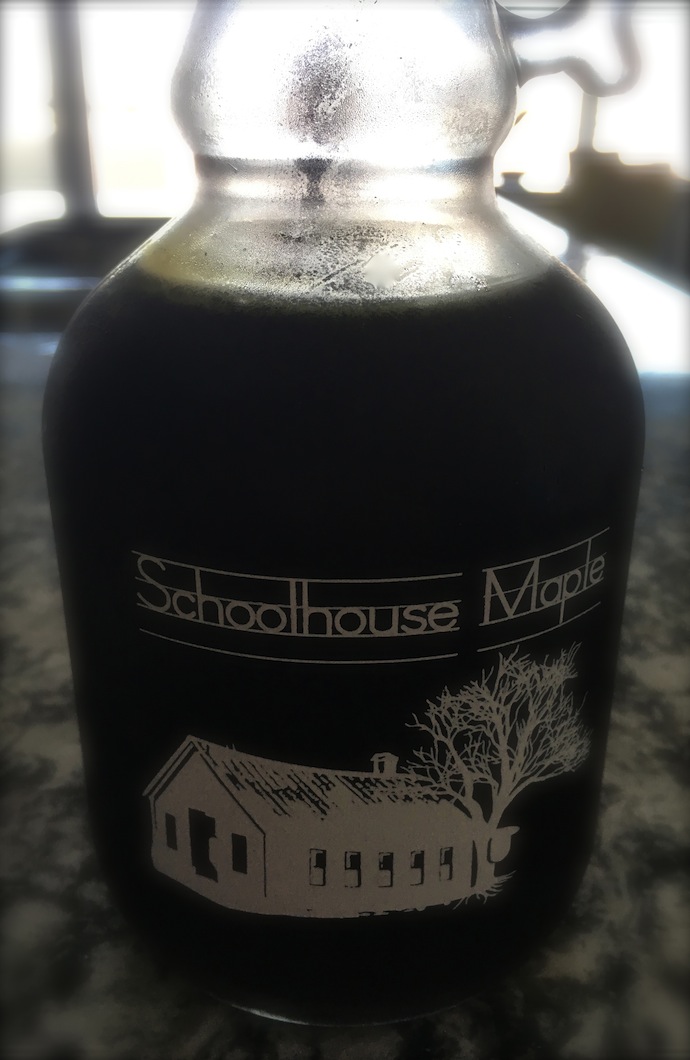 You want some? Get some! (Did somebody say holiday gifts?) Drop Jon & Dane a line:
schoolhousemaple@gmail.com
Mmm…

Well happy Wednesday to me! This just in, Another Best Day interview posted. Check it out here!

I learned of ABD this summer and think their message is totally awesome. It was founded with a simple idea:

To serve as a consistent reminder to make the most of every day. 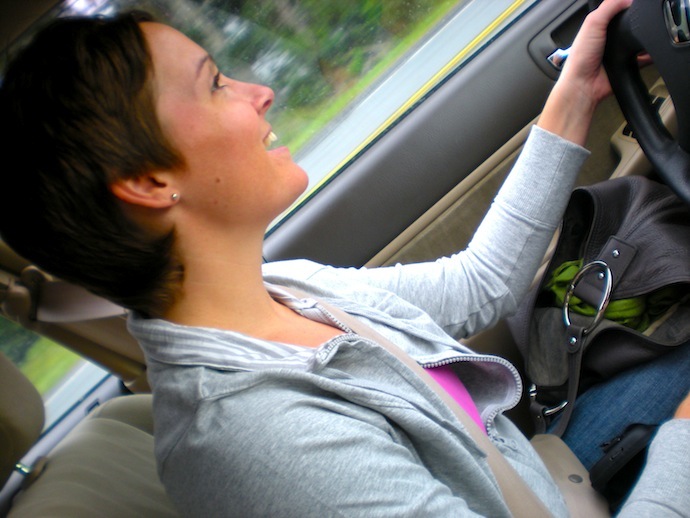 I agree with the Another Best Day crew, that we CHOOSE our thoughts, the same way that we choose our clothing. We choose to think positively, or negatively, we choose to think that we are capable of going, being, doing, and seeing anything imaginable, we choose to sit on our asses, or kicking them into high gear. Luck has nothing to do with accomplishing goals. Goals take hard work and making the choice to stick with them no matter what.

Think of the last time you had “the best day ever” and imagine it happening again and again because you wake up each day choosing that it will be. Seems pretty simple, right?

Thanks for working to spread a great message and including me in your awesomeness, Dave & Brett!

How do you pursue Another Best Day?

A little piece I just wrote about work life for a client. Plus a little photo I took. Hopefully some Tuesday inspiration for whatever you might be doing: 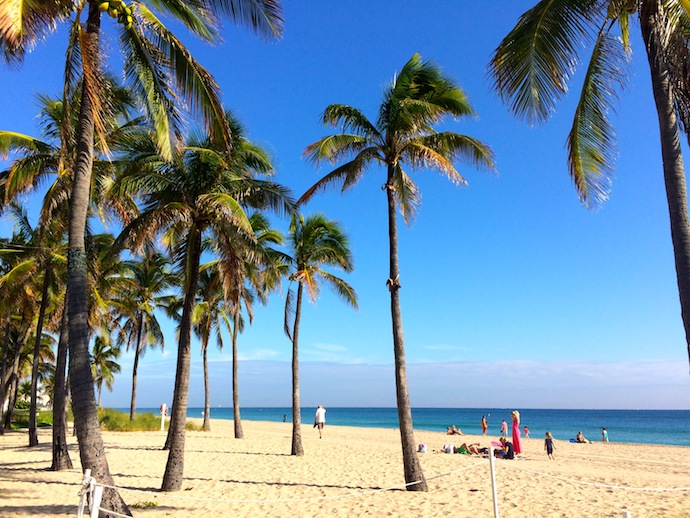 Where do you get inspired to get work done?

bored sitting there at your desk during lunch?

See Sean during 1 of his 52 jobs. Webisode here. Good stuff, great people. Watch one and you’ll be hooked.