I’ve recently started working with a fantastic organization called Soccer Shots. As I was getting my gear in order this afternoon for the kick off of the winter/spring season next week, three letters popped in my head:

Blue Lollipop Road and soccer go hand in hand! Do you know the story? If not, click here to read it.

If you have kids between the ages of 2 and 8 years old, and you don’t yet know about Soccer Shots, run- don’t walk to the nearest computer to find a program in your area and sign them up! This organization is incredibly well-organized, professionally run, and the curriculum is exceptional. Every last person I’ve met since starting with them, really cares about their job and the kids. I am thrilled to be a part of the team, and to have found a company who’s words and actions actually match. Such a rarity! Super bonus? The Soccer Shots mission, method, and motivation are very much aligned with what BLR is all about. Love that!

I started playing soccer at the age of 5 in tiny little Shaftsbury, Vermont at a place called Howard Park. (The same spot I’ve hosted BLR Play It Forward the past two years.) I’ve been playing ever since. The friends I made, the teamwork and dedication I learned, and the fun I had (especially during those young impressionable years), have had a huge part in shaping who I am today. I’m happy to be a part of the soccer community, and proud to be a part of Soccer Shots. To be in the position to coach young kids now, and teach them some of the lessons I learned through team sport, feels totally awesome.

Here’s to the love of the game, and to STRONG MOJO!

This is what my road looks like today. What’s happening on yours?

As I keep playing with food to make many of my BLR’s for my 365 project, let’s go all the way foodie-foodfest and help me in supporting my very good friend, and former soccer teammate- Chef Ryan Hutmacher for ABC’s The Chew! Yippee! Ryan is part of The search for the weightwatchers chef!

Here we are a few weeks ago when I was in Chicago:

Ryan was busy and hard at work, so our lunch catch up was where else? His studio; Centered Chef.

To say that Ryan has been a good friend and support to me, and all things Blue Lollipop Road over the past few years, is an understatement. He is that positive, but no bs cheerleader. The do the right thing when nobody is watching, honest to goodness, passionate, loyal, smart, driven, talented, sweet, and funny guy we all should be lucky enough to have in our lives to keep us inspired. I have seen few people work harder and be more dedicated than Ryan. Blood, sweat, tears, and more, this guy is the perfect example of stand-up, never stop following your dreams, and do work that matters. I hope anyone reading this will join me and  click on this link here and “like” on the Facebook/ABC Chew page to help support Ryan in this competition.

Good luck Ryan! Thank you for your continued support with all my big Blue Lollipop Road goals. You will continue to inspire health, wellness, and that anything really is possible- in all of us.

Here’s to going for it!

Looking for a home today in Cocoa, Florida at Camping World!

Would you believe I have never, (I’m not even kidding you) ever, gone looking for RV’s before? Perhaps my subconscious has kept me away, knowing the second I stepped foot on an RV lot, the roaming/wanderlust/road-warrior/nomad that makes up nearly every part of me- might spontaneously combust with excitement. So yeah- now I’m officially planning for the 4,567,398 time how I can downsize and live on the road again. (And bring someone else with me:)

Thanks for the tour and answering all of our questions, Randy! We may have found our future accommodations…

I don’t usually get attached to possessions. I generally think “stuff” weighs us down, physically and emotionally, ties up money unnecessarily, and ultimately, isn’t what’s really important. Well, I might be eating my opinions on that subject for a moment as I just threw out my favorite running shorts I’ve had for at least 10 years. (Ten years!) Here they are: 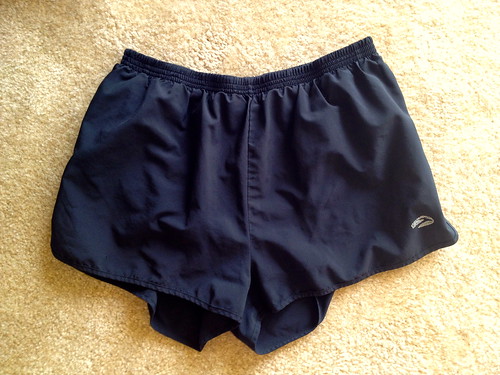 I’ve been holding on for weeks, but the elastic finally wore completely out, so as this set of trusty gear kept falling down during my run this morning, I decided it was time to say goodbye. (Otherwise the gift that would’ve kept on giving this holiday season would be my full moon to all the neighbors. Ho ho ho!)

Running is a huge part of my life, a near daily and very necessary thing for my sanity, but I hadn’t realized in addition to the running, these shorts have been necessary as well. I’ve cranked out between 20 and 55 miles a week for years, because I like to eat, and want to stay fit, but mostly because, like driving- running is this healthy drug for me, this high, my religion. It makes me feel like a million bucks. The thoughts, the plans, the hopes, the dreams, the everything and then some that’s swirled like wildfire through my head while wearing those shorts all this time beating feet, all those miles. I’ve run on sweltering days and in frigid temperatures, in the rain, in the snow, in the country, in the city, through the woods alone, through crowds of people, I’ve cried tears as I’ve jogged down trails and laughed too, I’ve almost lost limbs as I’ve bobbed and weaved between cars, I’ve had aha moments, I’ve been inspired, disappointed, I’ve pushed through heartbreak and loss, and felt exhausted, elated, empowered- I’ve even run a marathon: 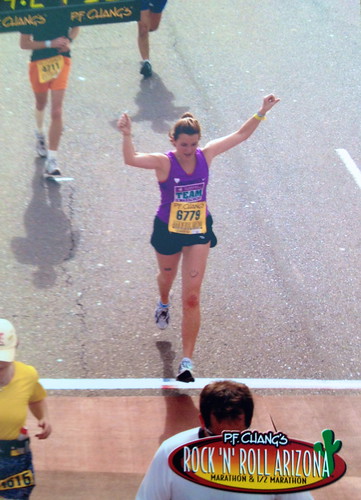 …and then some, all in that one little pair of plain black Brooks brand running shorts. Oh the countless stories and secrets these shorts will hold forever. Thank you Brooks for making a near indestructible product! Never did I consider I’d have a panic moment finally letting a piece of clothing go (I mean- that seems crazy, right?)- but as Kenny Rogers says:

From now on, my feet-beating while dreaming up next adventures and possibility will have to happen in some new shorts. Maybe I’ll get over-attached to a rainbow print pair this time.

What possession holds countless stories and secrets of yours?

Wallace Automotive in Richmond, VA is the shop where I’ve had all of my Honda’s serviced for years now. Every last person in both their locations has treated me like gold since day 1. They are by far the best in the business. I’m no longer living in VA, but I make sure to schedule time to have work done anytime I pass through town, and I always get continued love: 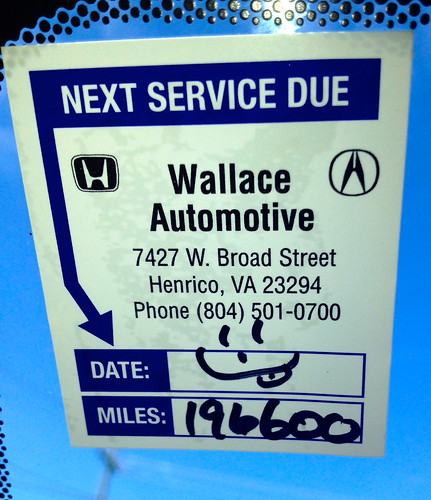 I always like to give props to any company that has consistent service like these guys. Thanks for keeping me safe and sound during all these years and my gazillion miles on the road, Wallace!

i love this guy 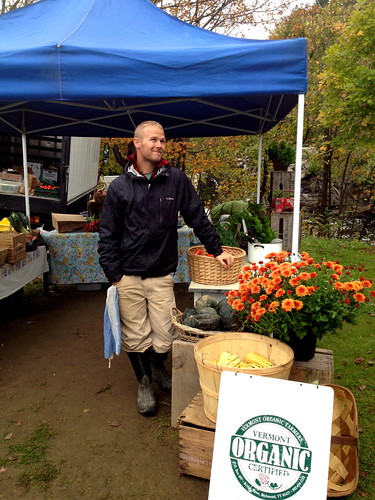 (I mean- how cute is he? He also happens to be my little brother, Brad:) I took this photo when we were goofing around at the West River Farmers Market in Vermont last year. Brad is a farmer. One among the many who work humbly and tirelessly to grow all that fresh delicious food that keeps us healthy. Check out this article he’s in!

Below is at the same farmers market last year. 3 of the 4 Peacock “kids.”  (Oldest ,DJ not pictured.) Youngest in the fam, Erin is on the right: 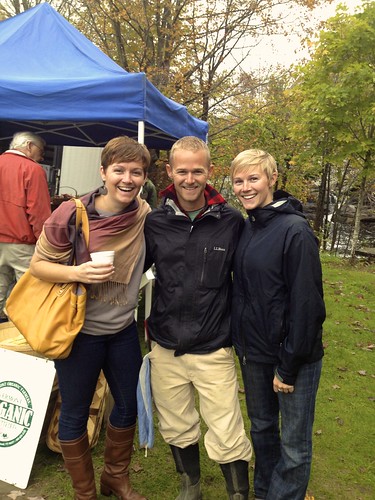 …she often works at Clear Brook Farm with Brad and the crew between her travels. Yay for amazing siblings! Yay for farmers! Three cheers and hats off to all the farmers out there who work their fingers to the bone to provide our communities with the best food possible.

If you’ve read here for any amount of time, you know that I love, love, love Roadtrip Nation. I randomly walked by a table in 2003 at my local VT bookstore, and this book caught my eye. I bought it was hooked: Instant superfan.

I’ve kept in touch and followed RTN for 10 years now, and met one of their Green RV crews in Chicago a couple summers ago which was a blast. Well, as usual the awesome peeps at RTN have been busy, still doing great work after all these years, and still growing. They’ve just launched a “Share Your Road” page on their website this week. (Of course I will submitting my road share.) In the meantime- you should share yours!

How do you define your own road?

Just came across this ad campaign and promptly ripped it out and taped it up. 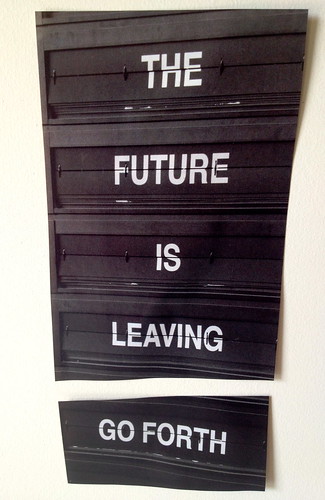 What ad campaigns inspire you?

so many things to cherish

I meet a lot of people in my travels, but my favorites are the ones who are truly following their interests and passions like Alicia Mohr, Designer of Ali’s Collection. I connected with Alicia in 2011 when I was living in Chicago. Funny story, I used to babysit for her in Vermont over 20 years ago. We grew up in the same neighborhood. We never stayed in touch, but the power of social media brought us together and we quickly became breakfast buddies during my Windy City time. Let two foodie, travel-loving entrepreneurs loose in Chicago with all those great noshing spots? We managed to eat our weight in indulgent pancakes at places like Bongo Room many times as we shared stories of each of our adventures around the world and in business.

Alicia started a series about Female Entrepreneurs on her blog Things to Cherish and asked if I’d be interested in doing an interview. (Of course I would!) Here I am. I’m excited to be in the mix of interesting and driven ladies doing things they love. I’m equally excited to have reconnected with a fellow Vermonter unexpectedly, who’s creativity and savvy way are great example of what can happen when you work hard and believe in yourself.

Thanks Alicia! Here’s to following your dreams and making things happen:)

i figured i’d start my birthday list early this year

Yes, now this is the kind of square footage I’m talking about.

(My birthday is August 15th in case you were wondering:)