i’m your holla back girl

The littlest things make me giggle.

I hope you all know that when you check back and there isn’t a new post it is never because I’m leaving you high and dry. Quite the opposite. I think about Blue Lollipop Road 24 hours a day. I have since the day I started it (and we are coming up on 2 year anniversary! Wahoo!)

Since deciding to stay in Napa 10 days ago (that is a story I still have to share too.) I’ve been networking, meeting, interviewing, working, organizing, feasting and running (as in jogging) my butt off. I’ve been the best kind of slammed busy. I at least wanted to sit down, say hi and give a teaser until I have some more catch up time this weekend. Just a few things out of the pile about these past yummy 10 days.

1.) Chowed down and hung out at a 2nd annual chili cook-off/Bocce Ball Tournament with a crew of new friends here. Bocce is the thing to do around the parts. Where else in the world would you have items on the wide open and shared picnic table like southwest braised lamb chili and cheddar scallion skillet cornbread accompanied by delicious wine mostly made by the people who there that were playing?

2.) I went to/worked at the Mighty Summit last Friday. Yeah; awesome. The top lifestyle bloggers and women in media were there. Big time funny, smart, and accomplished chicks who take social media to a whole new level. One in attendance bought a cat years ago from the animal hospital a mile from my parents house in Vermont. I love random connections.

3..) Off to this castle tonight to work at an event with my friend and now new roommie. I’m sure sipping some wine too. Yes, it really looks like this. Yes, all of Napa looks like this. I’m still waiting for someone to yell “That’s a wrap guys!” -and roll the scenery away as if it’s a movie set. GORGEOUSNESS everywhere.

The above is just a measly taste of my past 2 weeks here.. That means I’m in the right place for this point in my life. It was a 9k mile drive to get here, and what a treat at the end. Can you believe I have finally caught a clue at 32? Pay enough attention to myself, go where feels right and take advantage of all that’s offered and it’s like ping ping ping with awesomeness falling in my lap. Oh the learning curve.

Off to unpack the rest of my car and hit the showers. What to wear to the castle…

I followed behind this truck this morning and of course thought it was funny. What’s up with the music notes? Is it a chicken sing along inside? If so I totally want in on that party. 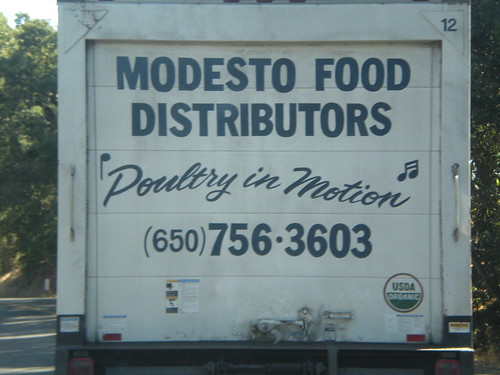 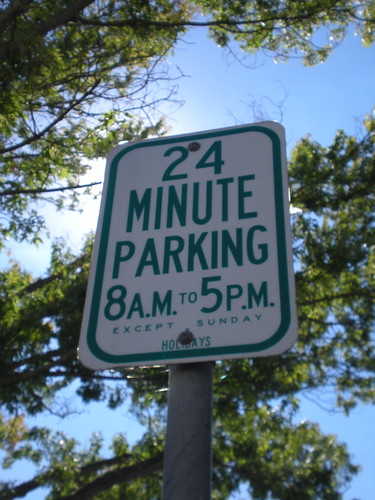 Parked in front of this sign yesterday in Downtown Napa. I wonder where they come up with the reasoning for this odd amount of minutes.

Once again an unexpected but welcomed invite to a strangers house for a Sunday meal and some fun yesterday. This time it was a birthday. I was happy to see a homemade (or should I say Mom-made) desert roll out. It was made up of a brownie bottom with chocolate and toffee chips inside, middle layer of dulce de leche ice cream and topped with a layer of pure chocolate. There was tiramisu too. Oh delightful. 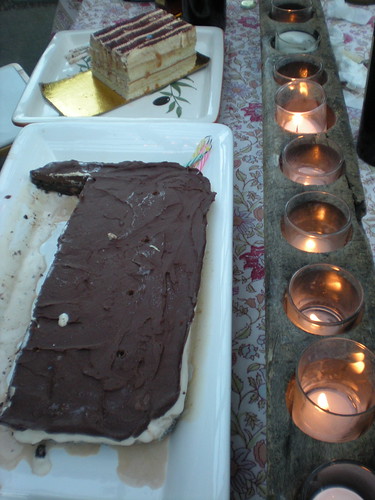 Of course there was good vino. In fact, the gent that was having the birthday is a Winemaker and popped open some of his craft deliciousness. 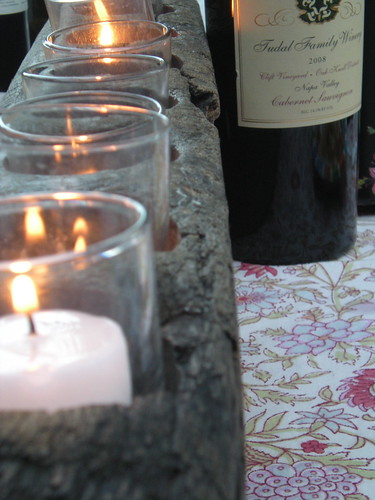 I’m loving these constant, effortless looking but perfectly executed get togethers. It feels like I’m living a daily Thanksgiving feast, meets European lifestyle, meets “Howdy neighbor! Come on over!” with sunshine mixed in. A little slice of heaven. 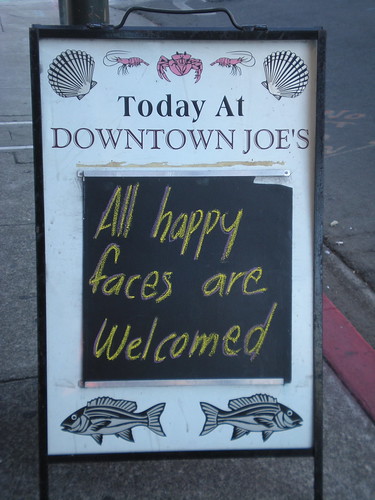 What a polite way of telling the grumps to stay out.

Because I have decided to stay in California at the end of my travels this summer instead of heading back east, today I will miss the wedding of two great friends. I am sad to miss their special day. This is no doubt that wedding that when the “You may now kiss the bride” part came, I’d be shrieking and jumping up and down. It is such a treat to be at a wedding you believe in so much. Coincidentally I am in Napa, overlooking the valley and this is where they got engaged.

Here is a cheers to you DP and LP! I am truly bummed I am not there at this very moment to enjoy the time with you. I know you understand my absence and we will find time to spend together soon. In honor of you both and to represent an official toast, I just poured this glass of wine and snapped this photo from where I’m sitting: 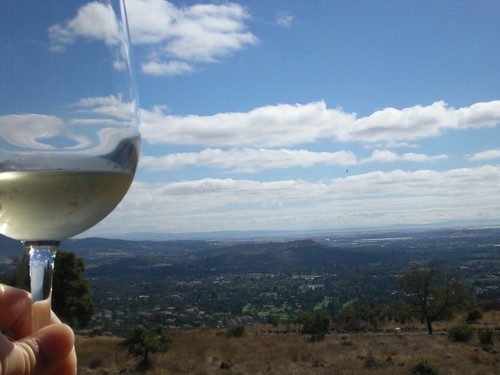 Here’s to a life of the laughs I know you will have and all the love you deserve. You two are the most adorable of couples and a perfect match. I am ecstatic for you!!! I can’t wait to see you soon to celebrate with you in person.

I’ll bring the wine of course.

CONGRATULATIONS AND SMOOCHES ALL AROUND!!! 🙂

what a difference a picnic makes

I’m happy. In a happy way I have never been before.

And I’m not even trying.

It’s the most odd but peaceful thing to make zero effort and feel like you belong.

Napa~ I think I’m home. (At least for now anyway…)

Resumes, refinancing car loans, moving credit lines for better rates and all that fun stuff the past couple days. It’s a regular fiesta!

Ok, not really a party, but when a appetizer/wine dinner, relaxing with new friends outside by a fire at an amazing restaurant pops up randomly that you’re invited to out of nowhere that rules. Having a productive day of crossing a bunch of big important things off a to do list then going to relax because you’ve earned it feels great.

Best of all mixed in there; Landing some work that will be totally interesting and a great learning experience. Also, being able to move some (blech!) debts and monies owed around so they can be paid off quicker, easier and at much less of an interest rate.

The phantoms don’t lie. We just don’t listen to them for some reason.

If you’re not doing what you love- you should at least give it a school kid try. I’ve decided to listen to the phantoms and have been no less than pleasantly surprised at the outcome so far.

i drove through a tree

Pretty cool and fun to do. The guy at the booth was supposed to charge me $6 to pass through and he let me go for free! I said to him when I rolled up; Really? 6 bucks? I am a broke traveler and just want to pass through so I can get some photos to post on my travel blog. (That’s the truth!) Maybe so many people will want to drive through trees after reading my post they will come in droves and you will become a millionaire!

He grumbled juuust a teeny bit, but then laughed and waved me through at no charge. Thanks Mr. Tree! 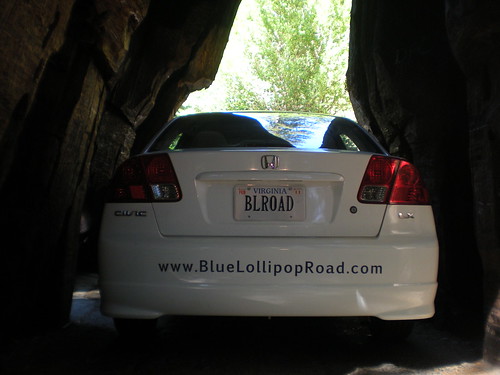 The little Honda Civic that could, loves the Giant Redwoods and gorgeousness of the Humboldt Redwoods State Park 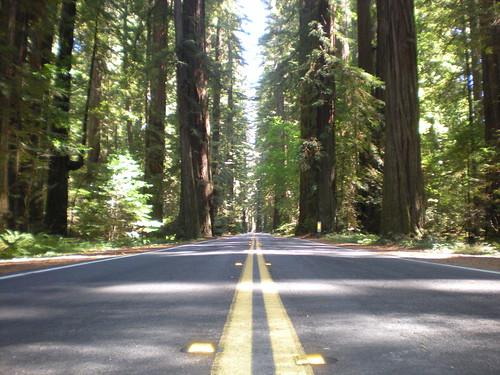 I really like photos of roads. Hmmm, that gives me an idea…

stopped the car the other day after a tasting

Jumped out, grabbed a few of these and gobbled them up: 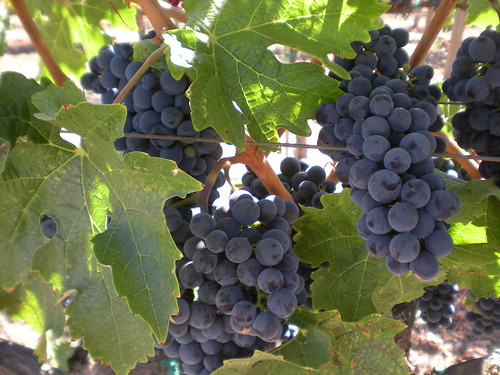 If that’s not a treat, I don’t know what is.